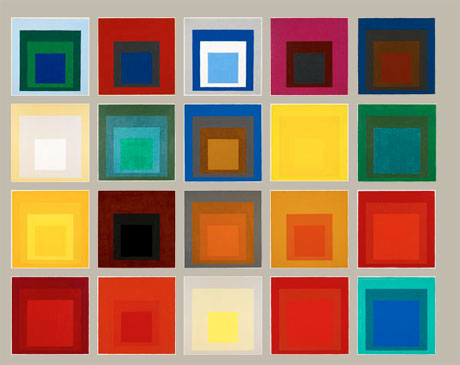 “I’m not paying ‘homage to the square’. It’s only the dish I serve my craziness about color in.”

Yesterday we observed a swimmer in the sea, gliding through currents of womby metaphysics.  Today, let’s take a look at a swimmer preparing to enter the water. You recall the watery pallet from Westerik’s piece and notice that Cezanne’s is quite similar.  Grey blues, slight green, bits of brown. I trace the pinks that highlight the vertical body of the bather. Now follow the pinks that create a horizontal swath of land behind him. These two masses balance each other; the similar colors join.  The man, rooted solidly to land. But he’s about to change that.

The bather’s toes swirl the water and you feel his contemplative mood.  This is the moment right before the splash. Heel on land. Toes tickle water. Clothes off. There is a familiar vulnerability and a sense of time suspended. And suddenly,you think you really want him to get on with it, because frankly, his vulnerability is making you a little uncomfortable.

The color blocking technique Cezanne pioneered is apparant, but he transitions his usual warm pallet to cool the effect here.  Cool and contemplative. The preparation before the ritual cleansing.  Thinking back over the day, hmmm. . . .that thing you banished to the back burner springs to mind, barrels to the front. Argh. . . You ponder for a moment to give it voice, your toes swish the water, restless.  Relaxing your muscles, flexing your joints. Preparing to forget.

A slight pause before you dive. The caught breath before the plunge.

(and the guy at the YMCA really did say that. . . he did the shoulder popping thing too)

Welcome to the jungle

I wish I could say this is me reclining naked, in my living room on my red velvet sofa, but alas, only the jungle part is true.  I lugged in my plants last night due to a possible freeze. The plant profusion did remind me of this jungle though, sans birds (but I swear I heard lions).

I love the feathered statuesque lilies, waving like plumage.  The lioness with her starting eyes, eyeing you– the prey.  An elephant trumpets loudly from the brush. A slithery coral hued snake. The full moon, a pearly marble orb.

It’s as if Rousseau took a slice of imaginary jungle, flattened between the pages of a book. The foreground and background are flattened out like a  flower that you press in a book and then frame; the plants here are a series of botanical prints all shoved together will-nilly.   Rigid and pointy. Very graphic. The bristly plants contrast with the rounded form of the woman’s body. And then, the stare of beady unsettling yellow eyes.

The red couch lady gazes languidly on. Looking, but not seeing. Garden of Eden or Heart of Darkness ala Conrad? (Rousseau painted it right before his death) It’s entirely possible that it is both.  I know my living room is.

What happened when I entered the Monet room at the MOMA? I can tell you I wasn’t expecting the vistas of water and light that engulfed me and left me gasping in slight pain.  These mammoth waterlily canvases are 14 ft long – each one. Six feet high. The three of them are side by side by side along one long wall – – that’s 42 feet.  You are literally swimming around in this canvaspool of color.  If I was a carp or frog, I’d die and come here, to Monet heaven.

This one is my favorite.  I’m captured by the sapphire blue, deep violet-purple and the little points of red. I had a little print of this one in my college dorm room. It got me through alot of teen angst.  How was I to know that it was so extraordinarily large?  This little poster drop of peace was in reality, a tremendous baptismal of beauty.  What else am I missing in life. . .what else is there to discover?

Most of Monet’s  paintings are small because he painted al fresco and needed to be mobile, but these were painted at a special studio he designed at Giverny.  Monet originally wanted these to be displayed on curved walls, obscuring the visual boundaries to capture the essence of one of the hardest things to paint – water.

Here’s the shady area of the pond. The cotton candy pink is fluffity deliciousness!  Unfortunately though, the shade didn’t stop there; Monet developed cataracts as he aged. In the face of that harsh reality we call “life,” we still have the chance to create a piece of heaven.

“the eye is the hammer”

So yes,  I’m really loving Kandinsky right now.  Maybe I’m finally starting to fall in love with Modern art. They’ve got this astonishing series of four Kandinsky panels at the MOMA, designed originally to surround you in a home’s entryway.

“Color is a means of exerting direct influence upon the soul. Color is a keyboard. The eye is the hammer. The soul is the piano, with its many strings.”  Kandinsky

Now, I originally saw these and thought “Four Seasons” and saw the landscape qualities in them. Spring, summer, winter, fall.

My SigO saw music.  The curator’s comments focused on the musical aspects, since Kandinsky was also a classical pianist and delved deeply into the spiritual and musical aspects of his painting.  So I didn’t say much about my alternative interpretation because god knows I don’t want to be “wrong” about art. How embarrassing would that be? Ha!

As it turns out,  a credible art expert takes my view as well, citing sketches Kandinsky made for these panels that show hills, sky, trees, etc.

Can I get a Hallelujah please? The stars aligned and the impossible happened.  We were both”right.” If it can happen once, It can happen again right???

My grandmother what sharp teeth you have. . .

These teeth have gnawed away at my memory for weeks since I saw this small Diego Rivera mural at the MOMA.  Interesting note:  When we entered the exhibit, we walked into a sea of sprawling legs — a group of children diligently drawing, laid out on the floor, right in front of this painting.  On worksheets with number two pencils.  Drawing these dangerous, snapping jaws with abandon.

Those glorious white canines ripping around and into your subconscious. The snarl of the subjugated. The blood lust of the warrior. Although it is the jaguar knight’s knife that is doing the dirty work here, it’s the teeth that snap up the glory.  Teeth that could shred the flimsy veil of “reality.”

So yes, the painting calls the poor of 1910’s Mexico to rise up against their oppressors, recalling the conquistador’s invasion into the Aztec civilization in the 16th century.  But if you watch closely and listen, you may hear a feral rattling. . .  parts of you that  have been exiled from your mind.  Those that may one day show their glinting white teeth.

“You’re my witness, I’m your mutineer.”  Warren Zevon from the song  Mutineer, I’ll Sleep When I’m Dead (An Anthology)

Also at the MOMA in a back gallery on the fifth floor is this monumental Picasso.  It’s so huge, the women are likely bigger than you.  No small feat for my SigO who is 6 foot 6.  The thing that stops you about this painting is this delicate pink color like cotton candy, wrapping the ladies from floor to ceiling.  It’s inviting and fleshy.  These prostitutes are inviting and fleshy.   Their stare is both a challenge  . . . and an invitation.  Although Picasso is playing around with the cubism thing here and there in this portrait, I can’t help but think this is a valentine to these women.  The background is white and blue, cloud-like to me, and his normal thick black lines are thinner giving these women an ethereal, angelic nature.  And then there is that whore with a black eye.

In contrast to these figures is a portrait of his peacefully sleeping lover seen at the Guggenheim in the Thannhauser Collection.  Instead of the angular lines above, he is sweeping in his strokes.  Her arms are wide arcs, quite different from those sharp elbows above.   These curves offer an embrace, a hug to her.  The violet color is so delicate you can almost smell the lavender wafting off her as she sleeps.  She was 17 when they met and began their secret love affair.  Secret. . . because he was already married.

I rounded a corner on the fifth floor of the MOMA and low and behold what did I spy with my little eye?  Van Gogh’s The Starry Night.  Blinked my eyes twice and yes it was still there.  Heard a woman ask a proctor “Is this the real thing?”   Yes lady it is.

This painting moves you; it sweeps you up in its staccato paint strokes and deposits you well above this mortal plane.  Vincent Van Gogh is in certain angst, having committed himself to a mental institutional at this time.  He hasn’t sold paintings.  His  failures overwhelm him and he struggles alone with mental illness.  Yet in the middle of this swirl of a breaking mind and heart you get this.  It’s a testament to any of us rising above our crazy mental state and creating something beyond.

“Sometimes moods of indescribable anguish, sometimes moments when the veil of time and fatality of circumstances seemed to be torn apart for an instant.”  Van Gogh’s own words at this time in his life.

I don’t recall too many impressionists trying their hand at night scenes, being mostly obsessed with the light and all. So I am fascinated with this night time landscape which creates so much drama.  This sleepy scene is anything but peaceful.  The stars pulsate, the wind howls and the cypress tree writhes upward from the ground. We are swept into the sky.

Instead of succumbing to this madness however,  I succumb to the beauty.

His paintings along with Picasso’s have garnered the most money.  The last one privately sold for over $90 millon.  He shot himself in the chest and died in 1890.

Been to alot of museums in my day, but today was a first for the Museum of Modern Art in New York City.  Dragged along my significant other who isn’t much into art, although I’m making progress.  Went straight for the fifth floor, not sure what I would find, but recognizing some big names that the SigO might tolerate.  Got the audio guide phone to help us out, in case we forgot our art history – Ha!

Walking through the first gallery I was taken again by Frieda Kahlo’s magnificent unibrow.  No wonder Diego Rivera left her (his exhibition is on the 1st floor).  Seriously though. . .we all try real hard to beautify and she just is sitting there unabashedly glorifying the unibrow.  My guess is she is  questioning the power beauty gives a person and then just flat out making you admire her big unibrow.  Ballsy!

Note to self: these were painted after her lover left. . .

Wandering through the galleries of picture snapping people, I was not prepared for major works by the heavy hitters that I had only seen in books.  If you like the impressionists and post impressionists, you have to persevere and make it through to the end of the fifth floor galleries to hit the jackpot.  Several huge (20 ft or more) canvases of Monet’s waterlilies! Incredible.  They swallow you whole and make you gasp for air.

Definitely worth another visit. I will be coming back for more!