It’s good to be queen 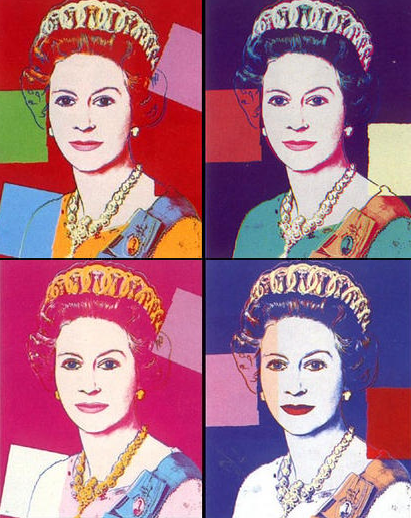 (overheard – Queen Elizabeth II on cell talking to her stylist of eleven years, Stewart Parvin about the acquisition of the Warhol prints)

Stewart, when you come up, bring a gin and that beastly pillbox.

Yes, yes. I’m fine. Just reading up on reviews of my Diamond Jubilee. It’s just the bees knees. Don’t you think it’s gone swimmingly so far? The paracute out of the plane at the Olympics was genius. And that Daniel Craig – brill.

Don’t forget the updated wardrobe spreadsheet. I need to approve next month’s ensembles. I do believe we forgot to log the Hermes scarf I wore yesterday. Bollocks – these readers!

I saw it on the tele, yes –  I’m absolutely cheesed about Harry’s naked bum pictures and Kate’s as well. Brings down the Royal brand, of course. PR is casting about for a new image to release for the media to bandy about. Preferably one that’s clothed.

I don’t know, Stewart. I think the colors are quite too garish. Do you think the public will like to see them at Windsor?

But I’ve run through my art allowance this year.  I could approve a petty cash expenditure.

Oh, alright, they are modern, sigh.  Send up the Royal gallerist.

Don’t forget the gin. And Stewart, I won’t wear the cornflower blue pumps until Lilly breaks them in again. They still pinch.

Haystacks for the gold

Today I made a collection of oh-so-delightful chubby haystacks.

In Monet’s vision, the haystack stands to the side, giving full deference to the atmosphere. And the sunset in turn, halos the hay in gold. We watch light’s magic, glorifying, coloring and blanching things. And though the colors sizzle, the haystack casts a prosperous cool shadow, holding down the foreground with calm aplomb.  Prepared.

Haystack pops front and center in Lichtenstein’s study of pattern creating form.  A braille stack redux.  I want to reach out and touch the dots, to push them together so they don’t hurt my eyeballs, which constantly try to connect and reconnect them. I give up and decide to study their shape and configuration. Like a nervous-tic they continue to addle my eyes, needling my subconscious. Scatterbrained haystack please stand still, please.

Ahhh, now my favorite, Will Klemm’s hay bale. Here we return to an atmospheric piece like Monet’s. And though reposed in stillness, there’s a tremendous amount of emotion rolling around. I want to give this hay bale a big squish hug and tell it everything’s going to be all right. But maybe it’s not lonely. A buddha bale that has reached peace, stopped rolling. With compassion it listens to my tales of woe. The shadow stretches impossibly long from a bright light source at an extremely low angle.  Is it physically possible? And then you realize he’s painting some hidden soul-field in your mind.

Or today your noggin (like mine) is the Lichtenstein.

Surprise! Near the end of his career, Lichtenstein turned his dots to breathtaking use in a series inspired by works from the Song Dynasty (960-1279).  Several are on display now at the Art Institute of Chicago as part of a sweeping retrospective.

He abandons his traditional primary colors in favor of a sky blue palette. Transforms his flat graphic style to meditate on depth, distance and the illusion of spaciousness. Eternity floating before our eyes.

Stripped down, the tight pixel pattern harmonizes with the spare eastern aesthetic. The graduated dots, fifteen different sizes, create scale and distance. With the tiny orange philosopher as the only figure to give us a non-dot reference.

Clouds, mountains and plunging gorges implied with staccato points. Forces your eye to connect them, read in between them. Merge the black space; eliminate the white space. Feel the tension between form and formlessness.

I enjoy the knurling tree, floating rootless, just as much as the orange seed speck of a philosopher. I wonder if together we contemplate his smallness and impermanence in the face of epic mother nature. Maybe that craggy mountain holds both our fates.

My teacher asked me the other day about you. We were making cards. I said that you were a “special needs mom.”  They say that kinda stuff about kids all the time at our school, but I think they mean the moms really.

If I had to pick a painting for you for Mother’s Day, I’d pick this one.

Because of the white bread and butter. The butter stick that you told me I can’t eat like a popsicle. I’m still mad about that, cause I can’t figure out why. It seems like a great idea to me.

I like this painting because it shows the middle part when you make me cinnamon toast — my all-time favorite breakfast. You taught me how to make it myself, but I’d rather have you do it. So I can watch my Lego movie, Clutch Powers.

I’ll try to eat it in the living room when you’re not looking. And I know that’s against the rules. You will probably find the crusts underneath the couch or between the cushions in a month or two, and make a fuss. But I can’t think about that right now cause it tastes sooo good and Clutch Powers is getting eaten by a Lego troll. . .

Your son (and my brothers too, but I think they would pick waffles)