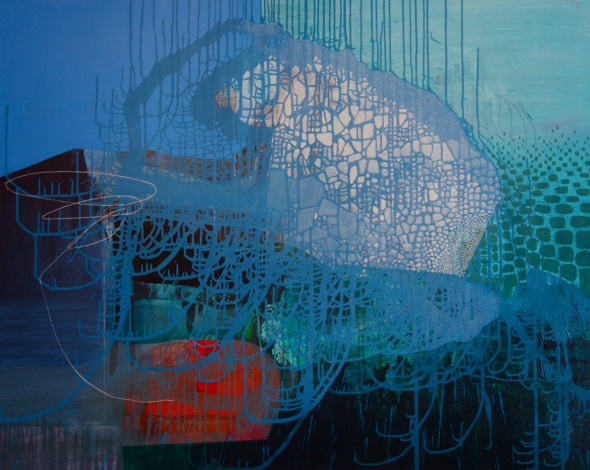 So I like Court Lurie’s art because there is no expectation of narrative or story structure. Narrative gets spooned to us all day long framing our view, pulling about our emotions, puppet-stringed by the story teller. Ourselves perhaps.

We don’t just “do the dishes” —  we slog through dishes for the two hundredth time for our self-absorbed roommate, who only thinks of herself, just like when as a kid, latch key in hand, made supper and scrubbed through chores until the parents got home. Right now the dishes are little injustices we’ve hauled around through the timeline titled, “my life as a loner.” Suddenly a red plate goes crashing.  Or a mug rage-tossed over the balcony. Leaving a pottery shard pattern on the sidewalk.

These implicit historical narratives wriggle into the everyday, drip and eddy around. Wordless tangles of old tapes playing almost inaudibly in the background. Stories about everything we do. If you start to get emotional about picking out your outfit, or why the stapler is missing, or why you have to pick up those legos again, or why your boss is mean to you — search for the narrative you are telling that colors the event, that nets around and crumples you into an emotional wad.

If the roommate is a lazy ass-moocher, kick ’em to the curb. Lose the roommate, lose the self story.

Definitely a better roommate, but doesn’t do dishes either. 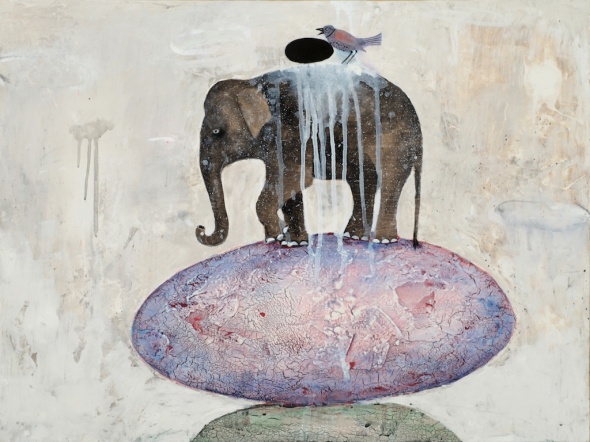 Which came first -the elephant or the egg?

I like obstacles. They tell on me. Study your obstacles – what tale do they tell about your thinking? Elephantine obstacles require a great force of self to move, but many are completely mind made up.

In this totem, the elephant balances on a lavender egg. The elephant, remover of obstacles – is at once young and old – timeless leathered skin defined by burls in the underlying wood.

In motion. Maybe she was laid off – again. Maybe he holds divorce papers – again. Maybe she heads a faltering company or he’s losing a major client. These two-ton obstacles to happiness force us into motion. This elephant puts one uneasy foot in front of the other and though vulnerable, balances between hope and despair. She will make this egg take her where she wants to go. Perhaps finding (while plodding) a new direction. We don’t know how, but she will.

The bird, however, is stuck. Staring down a small black egg entirely avian made. Some dark ritualized judgement grounds her from flying free. A perceived tragic flaw, “I’m unlovable,” or “I’ll never reach my goals.” “I’ll always be _________. “I’m the worst  ________.”  Her wings pinned back.  Cawing complaint.

But I see potential in this obstacle egg. Potential to find the thinking flaw.  Black egg thoughts have a shady “all-or-nothing” ultimatum-ish type character  – a dead give away. Hold on! I’m not the *worst* parent in the world. I messed up this time, but next time I’ll handle it differently. (deep breath)

Now we flex our wings. Now a dark egg cracks. Opens up to new and brightly life.

I’m a true Texan and therefore duty bound to soliloquize at length about this great state.

The United States is a good bunch and we get along with ’em right fine. But we are a former nation emeritus and as such are afforded special rights and privileges such as self-possessed gradiosity. If you drive along our highways, you’ll see road signs that warn we are not to be messed with.

Go ahead and fly into Austin’s airport. You will see the Stars and Stripes rippling in the breeze but sidled up right next to it a large Texas flag also waves its welcome. Our capital building is taller than the U.S.’s. Yes everything is bigger in Texas – including egos.

We wear our state flag, spinning tall-tales of Texas Mythology as big and wide as the Rio Grande. Even our cowboys are cosmic. We make ice cubes for tea in the shape of Texas. And silver replicas of the state dangle from our ears. Texas history is a  yearlong subject for fourth graders.

Bernie Taupin got it spot on my friends, see that little strip of stripes up there. That’s about the amount of effort we put into worrying about the United States.

We’ve got oil, cattle, energy and technology incubators to think of. We’re creating jobs and farming wind. We fought at the Alamo for god’s sake, spilled blood for independence from Mexico. That fierce individualism does not pass from the collective subconscious. It slow roasts in our barbecue, simmers in chili pots.

Anything can still happen in Texas. Where land is cheap and roads are long. We recently took a roadtrip with the kids. Lots of driving through Texas. I thought. . .

The sun is up, the sun is set, and I ain’t out of Texas yet.

Recently, my oldest son asked me if I’d seen the Easter bunny.  I said, “Not recently, but last time we spoke, he hadn’t had his second cup of coffee so he was, well, a bit crabby.”

We find ourselves wandering these unfamiliar streets sometimes, befuddled at the intersection of imagination and reality. Not really sure what to say, yet understanding vaguely that imagination must be nurtured. Hearing the Einstein eyes of this rabbit whisper,  “Imagination is more important than knowledge.” What to say to be truthfully imaginative? Or imaginatively truthful?

Just like in these Alexandra Eldridge paintings. “To do” lists fly helter-skelter and a too helpful butterfly unravels the coiled clothesline of reasonableness, now a scattered string of lost thoughts. Spilled coffee drips languidly down the right side of the canvas. Mr. E. Bunny at 6:15 AM.

Perhaps we could get some advice from this little charmer below, perched atop a yellow easter egg-shaped hill.  Stones sprinkling down from the clouds. Fragments of words, thoughts getting lost in the downpour. Couldn’t Mr. Bunny could spring off the hill anytime he chose, to avoid the pelting?  Perhaps he is frozen. An instinctual, native response to danger.  The feeling I get when my kids ask me if I’ve seen the Easter bunny.

“Not lately honey, I mainly just email him.”